The Travels of the Jones Family, and Narrow Boat "Keeping Up"

Click above to go directly to the Canals page

As foreign travel started to become possible again in 2022, we took the opportunity to celebrate Debbie's birthday with a winter cruise up the Norwegian coast. Our twin goals, apart from simply enjoying a different view of the spectacular Norwegian scenery, were to go dog-sledding and to see the Northern Lights. To our great delight we were able to achieve both of these ambitions in the beautiful, cold, and snowy wastes of Northern Norway.

I do hope you enjoy reading about our exploits; the pages are all packed with pictures; on a PC you will be able to scroll through them directly and there are also FlickR albums of our foreign travel pictures (particularly convenient for tablet and smart-phone users). The photos are all available at higher resolution so e-mail me if you'd like any of them sent to you or if you'd just like to get in touch.

If you travel by canal or caravan and like watching TV, you may need help finding the Sky satellite. I have devised the Satellite Sundial which you may find useful.

On our narrow-boat 'Keeping Up' we cruised almost every one of the connected canals and rivers of England and Wales, from the Bristol Channel to the Tidal Thames and from Llangollen to the Fens, and there are comprehensive accounts of most of our travels on our canal pages. However, after about 30,000 miles on 'Keeping Up' we have become tired of these canals and have sold the boat in order to concentrate on our explorations further afield. On larger ships we have travelled the world from the Antarctic to North Cape, from Russia to the American North-West, and a host of other interesting places; now we intend to find a host of even more interesting destinations.

Previous world cruises include visits to Scandinavia, Antarctica, North and South America, Alaska, Russia,  Europe, and Egypt (they are all listed below, if you just scroll down this page a bit further). We love small ships which can visit the smallest of ports and cruise the rivers and canals of the countries that  they visit; not for us are the giant cruise ships which are more like floating cities. So for a slightly different perspective on these countries, just take a wander through my memories on these pages.

We may not be travelling the canals any more, but all our canal memories will remain here on the web-site. Please browse the canal pages for a flavour of our beautiful inland waterways, or for further details on our favourite canals.

And once again, please e-mail us if you'd like to get in touch 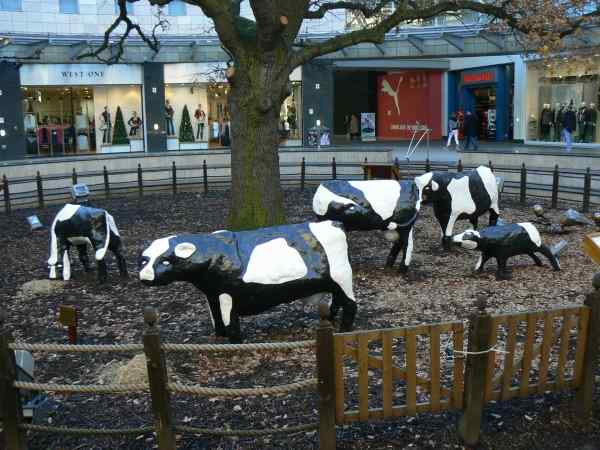 Milton Keynes, where even concrete cows do their Shopping

The canal pages have now got the pictures from our recent canal trips, as well as our earlier trips including the Bristol Channel, the Fens, the Great Ouse, the Thames and the Trent. Recently added are the stories of our two boats: "Thistle" the boat that survived two sinkings as well as being cut in half, and "Keeping Up" that we commissioned to replace her. You can also see and hear the working boats at the 2001 National Waterways Festival. There will be more trip reports and pictures added later, and hopefully I'll be able to scan in some old photos from our earlier trips - a task which I've just started with a few pictures and reminiscences of the River Shannon and the Norfolk Broads in the 1960s and 1970s, the canals in the 1970's, and our trips on Thistle from 1987-1991.

IN SEARCH OF THE NORTHERN LIGHTS

Early in 2022 we cruised the Norwegian coast in winter's darkness to see the Northern Lights. We saw spectacular snowy scenery and even spent a day dog-sledding.

In 2019 we completed the "Eastern European Ring" by crossing the Baltic to St Petersburg and back on a big P&O ship.

In 2018 we travelled on the rivers Rhine and Danube from Amsterdam to the Black Sea. This 3-week trip took us through 8 different countries and included visits to an amazing variety of towns and cities.

THE RIVER OF GOLD

In 2017 we went to Portugal to travel  for a week on the River Douro. The scenery was beautiful, the boating was spectacular, and the Port Wine was marvellous. We even harvested a bucket of grapes and had great fun treading them!

For Debbie's birthday in 2015 we took a short break to Iceland, with plans to see the Northern Lights (we didn't, although the camera did) to go whale watching (we didn't see any) and swim in the Blue Lagoon while it was snowing (we did, but it didn't snow). But it was a fantastic trip anyway!

AUTUMN COLOURS OF THE AMERICAN NORTHEAST

We flew to New York to see the amazing autumn colours of the American Northeast, travelling inland on a small ship to Quebec and Montreal via the Hudson River, Erie Canal and St Lawrence Seaway.

In 1832, Thomas Telford built a canal across the south of Sweden from Stockholm to Gothenburg. In 2013 we travelled in his footsteps on one of the canal's vintage passenger boats, and with my new camera at  the ready I was able to record much of this canal's unique atmosphere.

Two travel reports from Russia with Love. In 2007 we spent 2 weeks cruising from Moscow to St Petersburg, and in 2011 we returned to take the longer voyage from St Petersburg to Astrakhan and Rostov-on-Don. There are pages of pictures and descriptions of the major towns and cities, and of the cruises between including the Volga-Don canal. I'm sure you'll enjoy them.

Another of our travel reports, our pictures from Egypt. In 2004 we spent 2 weeks in Cairo, on Lake Nasser, and on the Nile and I have selected the best from all the pictures I took there.

Next there are our pictures from the Antarctic and the Chilean Fjords. We went there in 2003 for a once-in-a-lifetime experience in the last unspoiled place on the Planet. I've just finished uploading our logbook and I've selected the best examples of the 1000 pictures I took there. If you really like looking at penguins let me know and I'll email you hundreds more pictures!

The second fjord trip, in 2001, was to Alaska on board the last remaining great American Steamship SS "Universe Explorer"

The first of our BIG holidays, in 1999, was our Norwegian cruise to the land of the Midnight Sun.

All content on this site is © Allan Jones unless otherwise stated